I've got guts and determination

"if I want to do a thing, I'll do it" Anne Corrigan from the Treat Me Right! project talks to us about her work and her passion for singing.

Home / I’ve got guts and determination

My name in Hebrew means a lady of many talents, which is true because I enjoy doing many things. I can sing, I can do dancing, and I write poetry. And I work with Helen at Certitude for the Treat Me Right! Project.

I started working with Certitude nine years ago. I saw the job advertised for the Treat Me Right project as an awareness trainer, which is what I still do now. Helen wasn’t the manager then. I helped interview her. I like Helen because she explains things easily to me and it’s easier for me do the work. 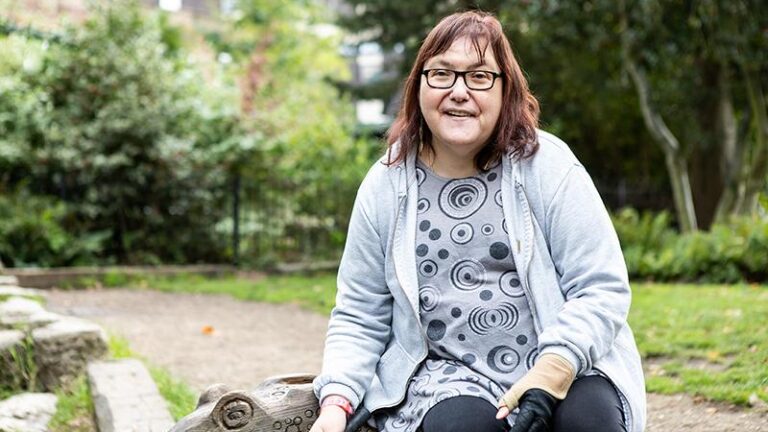 I was bullied at primary school and secondary school. I didn’t know that I had a learning disability and autism, I just couldn’t make friends. I went to a mainstream school; my learning disability and autism were diagnosed much later. With the bullying I never told anybody. I was scared. Both of my parents died of cancer 22 and 21 years ago. I had no bereavement counselling. I had to just continue to live my life.

I started going to the Speaking Up group in 2004. Now I am more confident. I still don’t speak up sometimes, but I tell myself I’m not at school now. You can’t really tell me off. You’re not my mum.

I’ve been working ever since I’ve left school. I’ve had lots of different jobs. When I left school, I went into hotel and catering on a new training scheme, which I don’t think exists anymore. But I enjoyed it. Not only that, I got my City and Guilds certificate for counter service assistance. Then I went to a firm that made spectacles before I got made redundant. I worked in Morrison’s (or Safeway as it used to be called). But I didn’t know how to work a computer so I went on a course with Learning Curve. The job I’m in now is my happiest. I love working for Certitude because the organisation understands me.

Helen, my manager, introduced me to Microsoft Teams during the pandemic, because we’re so used to working in person. I started to do a lot more things online.

It was during the pandemic that I started writing my poetry and songs. I started writing poetry because my depression got so bad, and it helped. Social Care Institute for Excellence (SCIE) have just videoed me talking about my poetry. I wrote a song too. It’s called “If dogs could talk what would they say?” I’ve even got my own YouTube channel so people can hear my singing.

I’ve been singing since the age of seven. I sang in church choirs, school choirs and have even sung in front of the whole congregation in church. Me doing a solo. I also used to sing in a rock band for people with learning disabilities called I Love Thunder. Before the pandemic I recorded a CD. We had a jamming session in Wales with the band, so we called it Welsh Jam.

I just like performing. It doesn’t matter whether I’m singing, dancing or reciting poetry. Some people think just because we’ve got disabilities, we can’t achieve our goals in life. But I’ve got guts and determination, if I want to do a thing, I’ll do it.

Once, Helen and I were at a learning disability conference at the University of West London and I was Co-chairing our talk and they asked me to sing. Bob Gates was the professor of learning disability nurses and he’d only heard me on my YouTube channel and he said, “sing Proud Mary”. One of the people there said. “Oh no, she won’t be able to sing that song”. I was judged before I’d even opened my mouth and I hate that. So, I sung Proud Mary and Johnny Be Good – You’ve got to live life to the full. We all have dreams. Like I want to be on EastEnders singing in the Queen Vic.

Also, during the pandemic, I won the competition to be Certitude’s CEO for the day. Helen put me forward for it. When my dad was alive, he said to me I’d make a good boss one day. Maybe he already knew the things that were good in me, I don’t know.

It was me who suggested to Aisling, Certitude’s CEO, that all new people who started at Certitude should have awareness training. Not just the people who worked directly with people with Learning Disabilities and Autism. That was my idea. And even though she’s high up in her job, she’s still a human being and I like talking to her. We’re all human beings. Some people forget just because we’ve got these labels. Labels are for jars, not for people.

Sometimes you need a label to open some doors, but it’s the person that walks through the door.